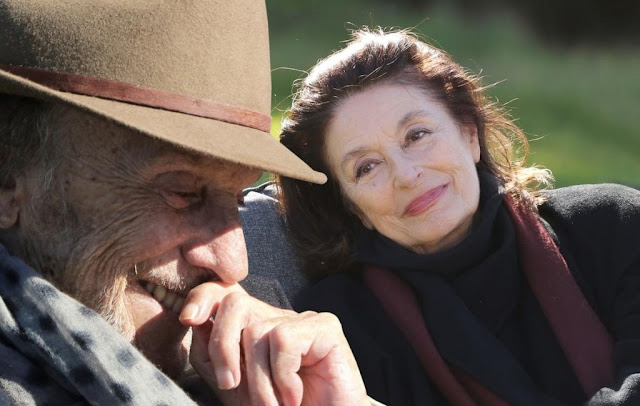 As I may have mentioned here before, Jean Louis Trintignant was my favorite living actor... that is, until yesterday, when he left us at the age of 91.

I said my farewell to him tonight by watching, belatedly, for the first time, Claude Lelouch’s Les plus belles années d'une vie (“The Most Beautiful Years of a Life,” 2019), the last of the sequels to A MAN AND A WOMAN (1966) and the final film to star Jean-Louis Trintignant. I read nothing about it at the time of its release and was under the impression that the reunion of Anouk Aimée and Trintignant had perhaps not worked out, so I was in no rush to see it. But last night seemed the sacrosanct moment, and indeed it was.

It's a very low-key film but a tremendous improvement over the intermediary A MAN AND A WOMAN: 20 YEARS LATER (1986). It basically tells the story of former script girl Anne Gauthier being approached by the son of former racing champion Jean Louis Duroc, asking her to visit her former lover at his assisted living residence; it seems his memory is fading as he loses interest in life, and all he can remember clearly seems to be the time he once spent with her.

Both actors have retained their ease and brilliance in these roles, and to jolt from the present tense to sepia footage from the 1966 film now stings in its sense memories of youth and beauty; the tears come as they do when you twease out nose hairs. The film coasts slowly along on fading memories, dreams, sly conversations, musings, and examples of some of the most profound poetry (Paul Verlaine, Boris Vian), and then—just when it seems to have run its course—it throws down the most stunning sequence I’ve seen in years. The penultimate stretch of the film straps the viewer into the driver’s seat for a high velocity POV shot of an urgent, instinctive journey—a mythic journey—indeed, a mythic one for anyone who knows and loves the original film. I don’t know the story behind this footage but we’ve never seen it before and yet it works as a heretofore missing but essential piece of the original film, something we have only experienced through narrative hearsay and through the window of a romanticized montage. As we accelerate dangerously through the streets of Paris, the windscreen is serially splashed with pure cinema: the rocketing journey through endlessly available avenues and occasional obstacles; the awed realization that we are seeing a real-time extended memory of a Paris of the past; and the overlays of images from the film’s past and present tenses become a momentous reflection on life, on passion, on how quickly we pass through this life and how little time it takes to profoundly change our life, and also a reflection on the way we turn to certain movies at certain times to reawaken a certain feeling, to weep in the dark. I felt I was watching the French New Wave analogy of the Stargate sequence.

Full disclosure: As far as I can tell, the film isn't available anywhere commercially in English, so I can’t point the way for you. There is a French Blu-ray, of course, but I believe it's only in French. I’ve had my copy for awhile, and its subtitles were almost 20 seconds out of synch and I couldn’t bear to watch it that way; another reason I put it off till now. It was a miracle but I looked again for English subtitles online after reading of Trintignant's death and Jean-Louis somehow guided me to the perfect fit. It’s a bittersweet film, as are the other two, but I’m so glad to have seen it, and so pleased for Lelouch and his actors that it’s a triumph.