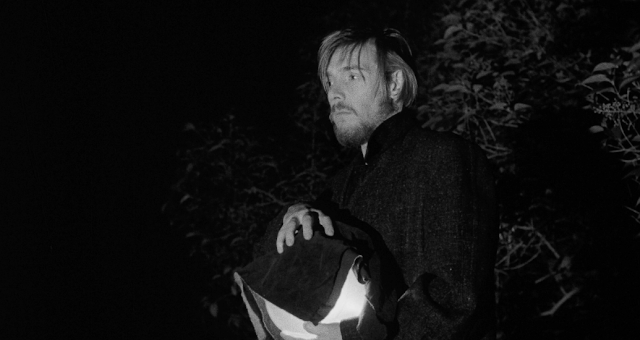 Directed by actor Bruno ve Sota (DEMENTIA, ATTACK OF THE GIANT LEECHES), this dirt-cheap AIP acquisition is an uneven but consistently intriguing riff on Robert A. Heinlein's 1951 novel THE PUPPET MASTERS. Heinlein noticed and sued the film's (uncredited) executive producer Roger Corman, but the case was settled out of court. The novel was not officially adapted to the screen until 1994. 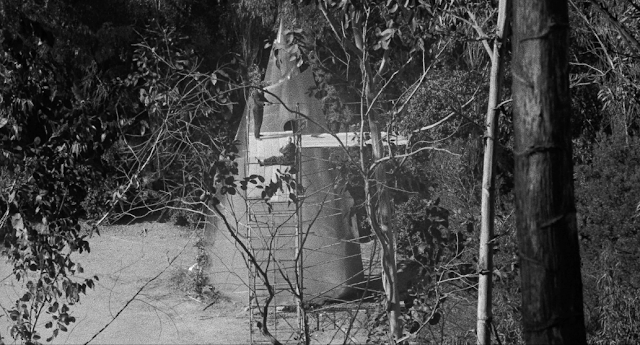 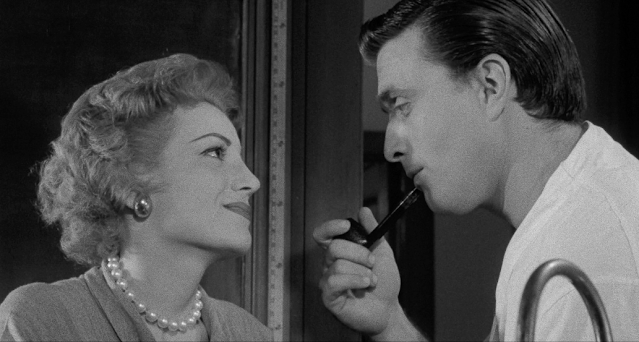 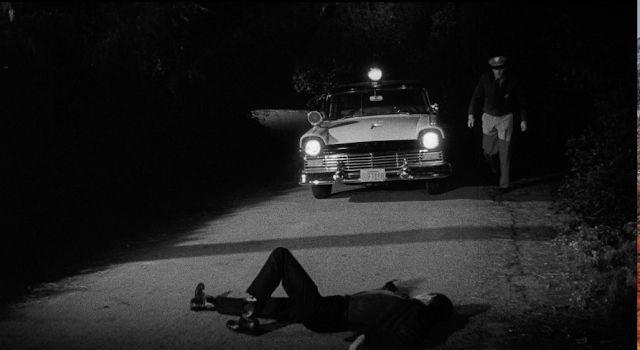 The film opens with a random juvenile delinquent assault, followed by the discovery in a forest ravine of a 50' missile - two incidents that are soon found to be related. Pipe-smoking Dr. Paul Kettering (an early starring role for ATTACK Of THE CRAB MONSTERS’ Ed - then Edwin - Nelson, who also produced) takes the lead in an investigation of the seemingly uninhabited spacecraft, and is quickly leaned on by Washington in the person of science-scoffing Senator Walter F. Powers, who smells something "anti-American" about it. The answers he demands soon become apparent through the silent actions of two squirrelly young men (one is Hampton Fancher, the future screenwriter of BLADE RUNNER; I don't know who the one with the untimely long hair and beard might be*), who hustle furtively through noirish streets while clutching boxes with an inner glow à la “the Great Whatzit” in KISS ME DEADLY. They have been taken over by parasitic brain leeches that latch onto their napes, and are being impelled to spread the alien - but ultimately, not otherworldly - influence to the most politically powerful people in the area, starting with the Mayor. (For some reason, tough guy Walter F. Powers is never threatened.) Joanna Lee (PLAN 9 FROM OUTER SPACE) plays Kettering's girlfriend Alice, who is overtaken in a flowing nightgown, thus becoming an erotic enticement for Kettering to join the invasion in the film's closing minutes. Quite unusually for the time, the attack on Alice is filmed with a highly mobile hand-held camera from the perspective of the alien presence, which frankly look like motorized merkins with pipe-cleaner antennae. 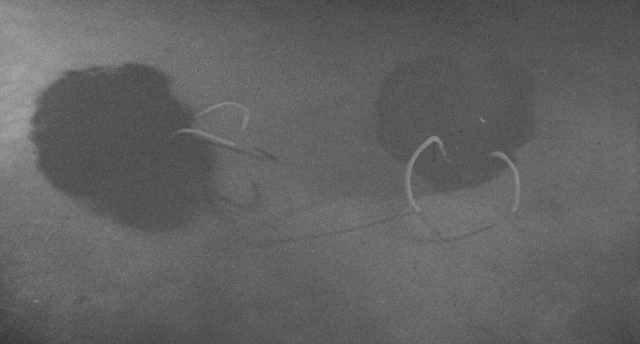 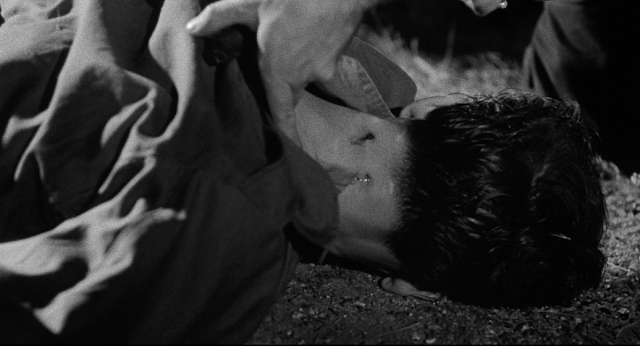 Running only 61 minutes and starting out with an ace Paul Julian title sequence (scored with Dmitri Kabalevski's Symphony 1, Movement 1, "Lento"), the film gets off to a jagged start but it soon levels out to a taut, expressionistic piece with a bold experimental streak that occasionally begs to support ve Sota’s claim that he co-directed DEMENTIA with John Parker. Over the years, beginning when I was very young, I’ve seen this film numerous times but have always had a hard time remembering much about it, perhaps because with its narration, cantered angles and shadow play, it has the feel of a waking dream. It works because the whole is somehow held together by a few other committed performances, terse narration by second male lead Alan Frost (aka Alan Jay Factor), and a brooding and energetic library score made up of bits of Shostakovich, Prokofiev, and Ralph Vaughn Williams. It also has three or four dynamic scenes, such as the confrontation in the Mayor’s office, which are shot and cut in a stylized yet two-fisted way that now recalls the feel of Romero’s NIGHT OF THE LIVING DEAD. As if the movie's not weird enough, it also includes a pre-celebrity cameo by Leonard Nimoy (his credit reads "Nemoy"), who looks like a character from the Bible having a schvitz with only his voice recognizable. 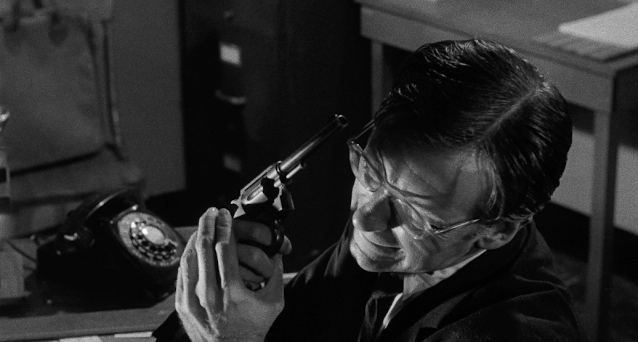 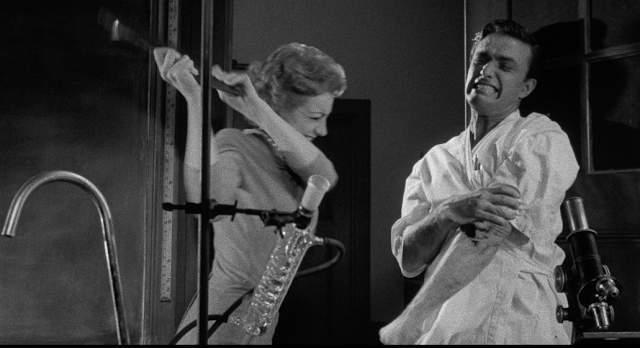 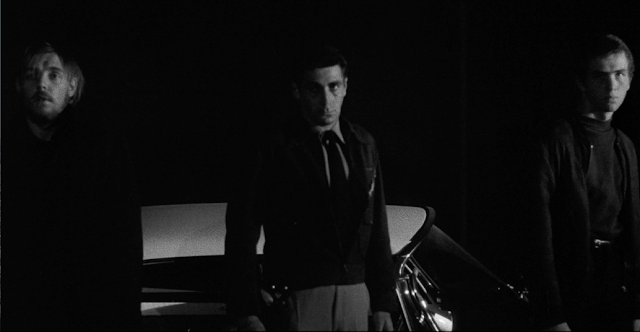 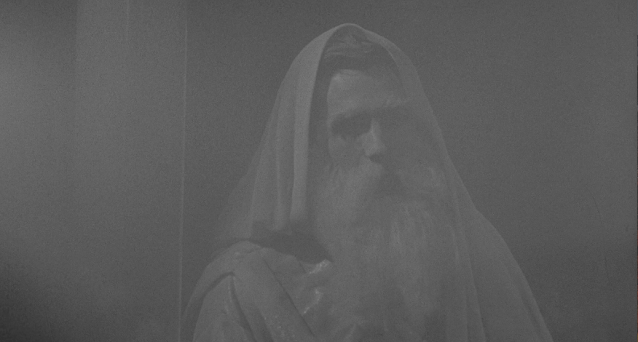 A 2K scan from a fine-grain element, this Scream Factory release (Region A) is a limited edition of 1000 copies sold exclusively though the Shout! Factory website. (Clicking on the blue title above will take you there.) Though the packaging describes the video as 1.37:1, it is presented on disc in anamorphic 1.78:1 and the compositions always appear to be perfectly balanced. There are a couple of instances where the film grain on faces is overly active and noticeable but there’s no denying this is the best the film has ever looked. There are no supplementary features. Collectors of AIP and dark sci-fi curiosa are advised to pounce fast, while supply lasts.
Speaking of which, it appears that Scream Factory's 1500-copy limited edition of Roger Corman's DAY THE WORLD ENDED (1955) is still available, which I would have to call an even more pressing purchase.
Special thanks to Sam Moyer and Michael Draine for their help in identifying the library music composers.
* I thought it might be Charles B. Griffith (another screenwriter!) but his daughter says no. If anyone knows the answer, let me know.
(c) 2022 by Tim Lucas. All rights reserved.