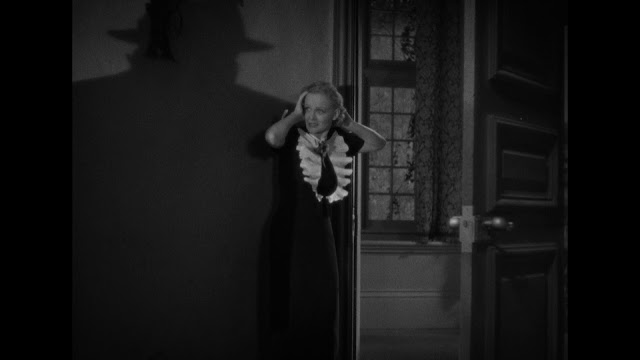 A remake of Erich Engles' 1932 "locked room" mystery GEHEIMNIS DES BLAUEN ZIMMERS, THE SECRET OF THE BLUE ROOM has long been a subject of fascination for the most obsessive of Universal horror fans. Though not really a horror film, it does aim to spook and hails from the studio's initial embrace of horror, having been produced smack dab between Karl Freund's THE MUMMY (1932) and James Whale's THE INVISIBLE MAN (1933) on sets recycled from Whale's THE OLD DARK HOUSE (1932) and FRANKENSTEIN (1931). It's Universal's only "old dark house" thriller to open and close with the company's distinctive "Swan Lake" theme, conducted by Heinz Letton. It also stars two of the company's great genre stars, Lionel Atwill (in his first Universal film) and Gloria Stuart, heading a nearly nonpareil supporting cast that includes Paul Lukas, Edward Arnold, Onslow Stevens, Robert Barrat, and Elizabeth Patterson. Further sealing its horror status, it was also among the titles first released to television as part of Universal's original "Shock Theater" package in October 1957, so it happened to be seen and memorized by a select number of "Baby Boomer" viewers before it completely vanished from view for many years. It was only a few years ago that the film resurfaced after decades of neglect on DVD-R as part of Universal's Vault Series, and now Kino Lorber has licensed it for Blu-ray in what appears to be a spectacular looking restoration, though it's not being pitched as one. 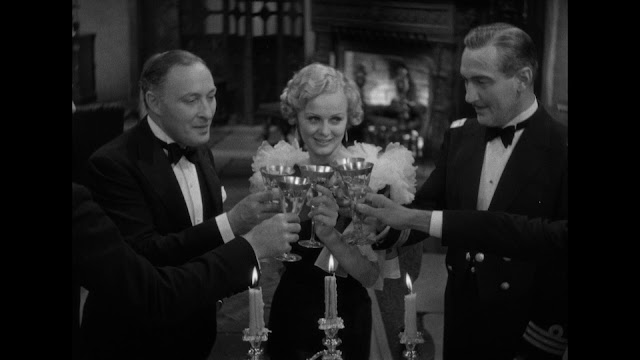 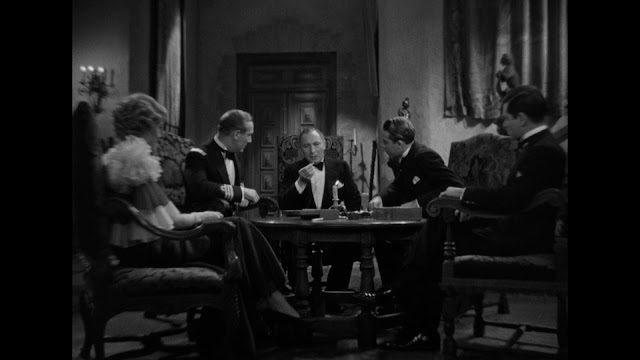 At Castle Helldorf (evidently somewhere in Europe), it's the 21st birthday of Irene von Helldorf (Stuart, in a procession of frankly absurd Vera West costumes), and she's celebrating in the company of her father Robert von Helldorf (Atwill) and three remarkably chummy suitors: Naval Captain Walter Brink (Lukas), reporter Frank Faber (Stevens), and the youngest, the rather dashing Tommy Brandt (William Janney). After a fine dinner, they assemble around a table for drinks and conversation, which lead to Robert being pressured by Frank into telling them the true story behind the local rumors about the castle's fabled Blue Room. He explains that, twenty years earlier, when Irene was still an infant, three men were sequentially murdered in that room in a case that was never solved. No murderer was ever seen exiting the room's only door. Tommy, who has already proposed to a not-very-receptive Irene, determines to prove himself the equal of Walter's military bravery and Frank's journalistic enterprise by spending the night in the murder room. As you can imagine, this doesn't go well... and it's just the beginning of a renewal of the Helldorf family curse. In time, Commissioner Forster (Arnold) is summoned to investigate. 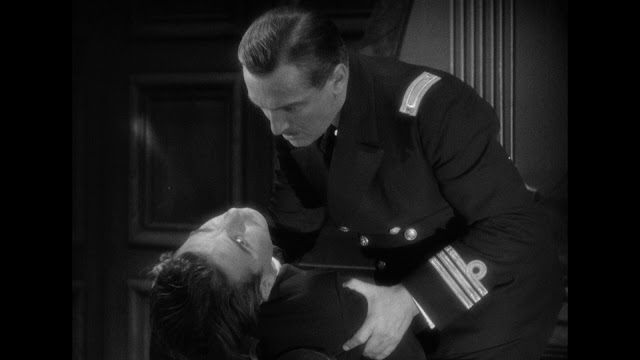 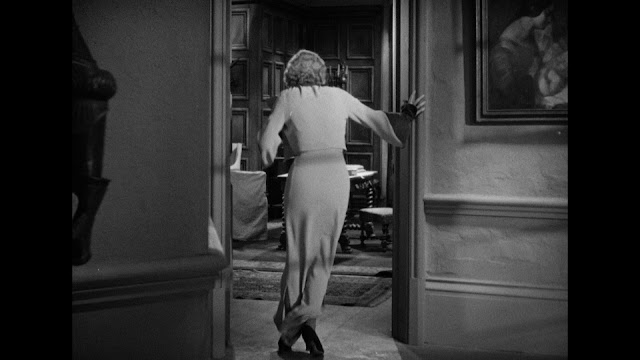 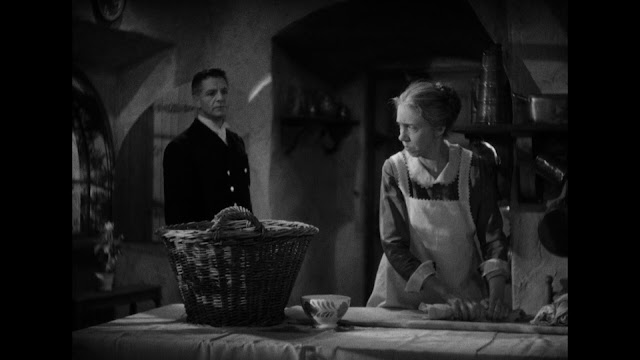 Subsequently remade by Universal as John Rawlins' THE MISSING GUEST (1938) and Leslie Goodwins' MURDER IN THE BLUE ROOM (1944), THE SECRET OF THE BLUE ROOM is very much a B-picture, albeit with better patrimony than most. It was capably directed by Kurt Neumann (whose later work would include KRONOS and the original version of THE FLY) at the Wellesian age of only 25. Though the final act thankfully slips us a surprise, much of this short feature is either blatantly predictable or challenging to logic, but the viewer - at least this viewer - is held close by the quality cast and the comforting "house style" atmosphere conjured by Stanley Fleischer's moody art direction and the cinematography of Charles J. Stumar (THE MUMMY). The closing shot, which suggests a more theatrical experience, is remarkably solemn and effective. 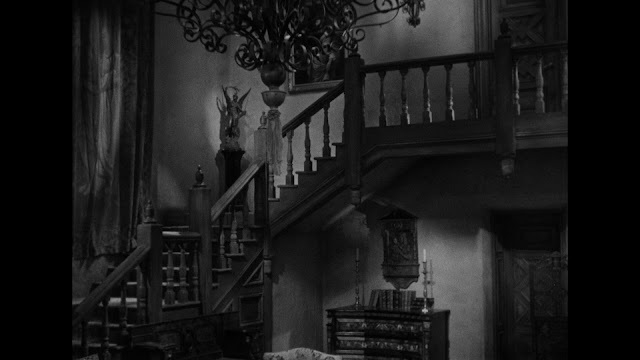 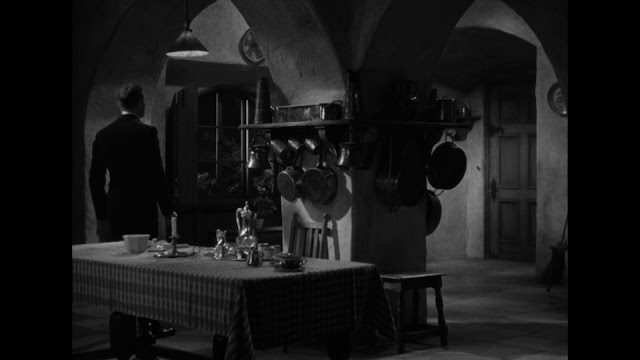 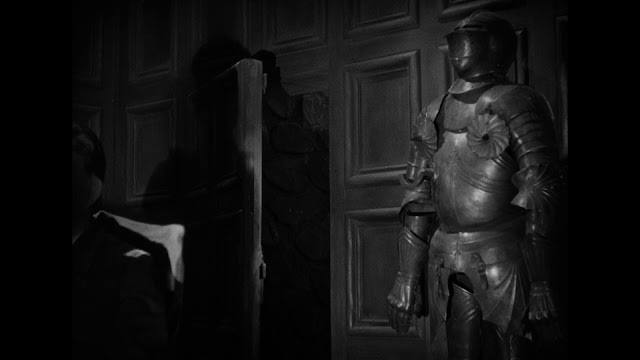 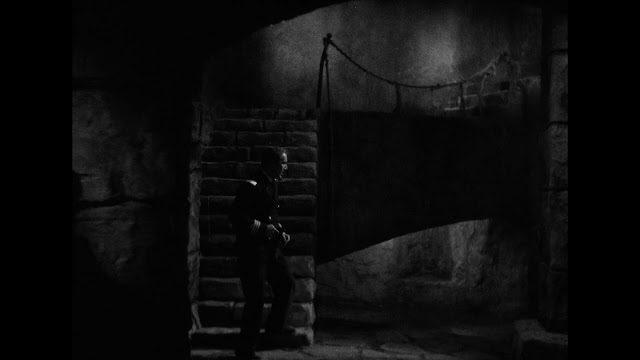 The disc's principal extra is an audio commentary by filmmaker and film historian Michael Schlesinger. This is not the sort of film that lends itself ideally to commentary, because it's straightforward and neither very deep nor original. That said, Mike - who's an old friend of mine - gives it his best shot. There are a couple of brief silences, there are jokes aplenty (some at the film's expense, but with the love), and there are vamps, but it's apparent at all times that this film is an old and dear friend to him. He offers up a wealth of knowledge about the cast and crew, the circumstances of production, and even the history of some of the furniture used in the picture - noting that a matching set of antique chairs and a love seat went on to appear in Larry Blamire's DARK AND STORMY NIGHT (2009), a film he co-produced. He also views the film with a professional eye, pointing out some fumbles probably left in out of haste (it was reportedly shot in just six days) and how some scenes are hurt by the film's paucity of music, and pausing here and there to appreciate the placement of props and set dressings that add to the photography's sense of depth. It's a friendly, attentive, and affectionate commentary, which is pretty much what the movie calls for.

The Region A disc is presented at 1.37:1 with optional English subtitles only. Also included as extras are a few uncommon Universal-related trailers (including THE SPIDER WOMAN STRIKES BACK and THE MAD DOCTOR), which for some reason play without sound.

Available now for pre-order, THE SECRET OF THE BLUE ROOM officially streets on November 2.