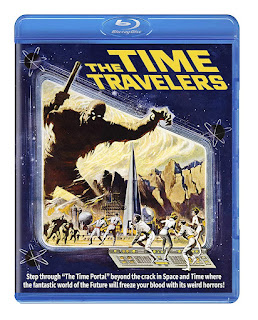 Writer-director Ib Melchor’s THE TIME TRAVELERS (1964) is a former American International Pictures release that I first discovered on local commercial television some 50 years ago. It's the story of four workers (DOCTOR X's Preston Foster, Philip Carey, Merry Anders, Steve Franken) in a scientific installation who are studying time travel and inadvertently open a window that takes them "through the looking glass" into the far-flung year of 2071, when the few survivors of an atomic catastrophe (led by ATTACK OF THE PUPPET PEOPLE's John Hoyt) war with a splinter society of mutants while erecting a starship to escape their oppression and the slow death of Mother Earth.
I revisited the film a couple of nights ago, courtesy of Kino Lorber's recent Blu-ray release. Going back to it was a joy, refreshing my appreciation of its appealing personality and the sense of wonder it achieves on such a small budget. Just the opening shot - a slow zoom into a color slide of the galaxy - is surprisingly powerful on a big screen, especially when wedded with Richard LaSalle’s literally awe-inspiring music - I assume, a library recording. 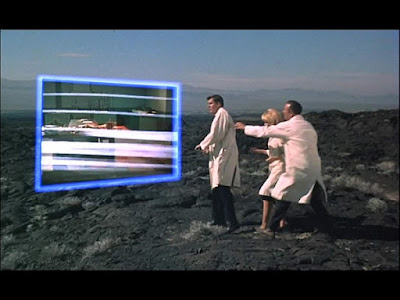 The movie's real masterstroke of execution is that, with the exception of a few opticals, the bulk of the special effects were done either live on set (in the manner of magicians’ illusions) or in-camera, and some - like the removal and replacement of a living android’s head, filmed in a single sustained shot - impress no matter how many times you rewind and replay them. 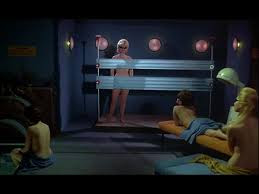 Each time I see it, I’m impressed that Melchior, while crafting an essentially wholesome work, found a means of remarking on what might become of mating habits and sexual interplay in a future time of duress. I've always particularly loved the scene where time seems to stand enchantingly still: Steve Franken's first date with a girl from the android assembly line, who serenades him with a "Lumichord," a kind of luminous abstract keyboard instrument that emits a glittery, otherworldly, romantic instrumental that is nearly the equal of “Telstar.” Aside from a few trailers, there are no extras on the disc, but it’s well worth having. It always entertains, and the new 2K restoration is lovely - and I also believe the mind-blowing finale may have inspired Stanley Kubrick’s approach to his Stargate sequence.
Melchior was the heart and soul of 1960s science fantasy. He also wrote and directed THE ANGRY RED PLANET, in addition to scripting Byron Haskin's ROBINSON CRUSOE ON MARS and Mario Bava's PLANET OF THE VAMPIRES (as well as REPTILICUS and JOURNEY TO THE SEVENTH PLANET, though these failed to take full advantage of his talents). These works are very much a bridge between 1950s pulp science fiction and what science fiction would become in the immediate wake of 2001, before STAR WARS hijacked the genre for decades to follow. THE TIME TRAVELERS may just be the best and purest distillation of his many talents.