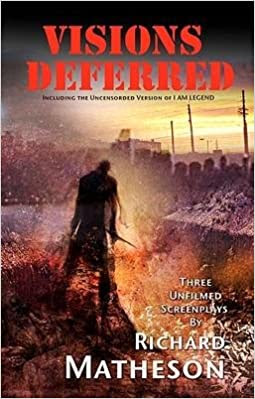 Last night’s reading was SWEETHEARTS AND HORRORS, Richard Matheson’s never-filmed spooky comedy written to reteam the glorious cast from THE COMEDY OF TERRORS (Boris Karloff, Basil Rathbone, Vincent Price, Perer Lorre and Joyce Jameson) with the added salt and spice of Tallulah Bankhead. The story follows a reunion of all the greedy, hateful siblings of the Sweetheart family (each of them working in some different aspect of show business) upon the death of their father, whose recorded will stipulates that his $60,000,000 fortune will be inherited by only the last survivor of the first night in his booby-trapped castle. The project was all set to go at American International but was reputedly shelved when Lorre died; even so, the script places unrealistic physical demands on the elderly cast and one wonders how they - especially Karloff - would have gotten 'round all the stumbles, catapults and pratfalls required of them.

The script is hilarious, somewhat more adult than AIP’s usual fare (Rathbone’s character is handsy letch who can’t stop pursuing Jameson’s busty housemaid Mrs. Bedworthy!) with some nifty macabre moments as well. Its last 20-30 minutes suffers a little from repetitious incident and the whole of it may be just a little too hectic... at least for the time intended (1964-65); all kid-friendly movies today are fashioned for a sugar-fueled crowd, and this would go over fine today. As with THE COMEDY OF TERRORS, the dialogue is funny, occasionally ribald, and exquisitely crafted. To have seen the intended cast in this would have been an absolute joy. I read this script while listening to Les Baxter’s music from THE RAVEN, MASTER OF THE WORLD, and other movies, which turned out to be ideal accompaniment. Reading this made me more interested in seeing the original COMEDY OF TERRORS script surface because the narrative text here is just as amusing as the acidic dialogue.

If Tim Burton knew what was good for him, he would grab the screen rights pronto and bring all of these great stars back to life in 3D animated form. The tricked-out haunted house with all its wild death-dealing devices would lend itself ideally to such animation, and - as noted - the accelerated, hyperbolic pace would be right at home in these times. Also (hint hint), Barbara Steele would be the perfect alternative to Tallulah.

SWEETHEARTS AND HORRORS is included in the book VISIONS DEFERRED, which is still easily and affordably obtainable from Amazon, eBay, and other outlets. Follow the link in the first paragraph.