Lupin Is Mightier Than the Sword 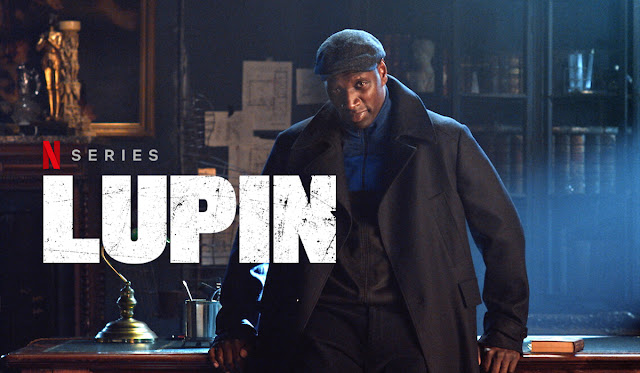 New on Netflix is a French import mini-series, LUPIN (subtitled "In the Shadow of Arsène") - which, as you might imagine, is a modern day reinvention of Maurice LeBlanc's great gentleman thief, originally published between 1907 and 1941. As an admirer of these novels and stories, my initial expectations of this series were not very high; however, I'm pleased to report that the results are impressively elegant and charming.

Omar Sy stars as Assan, a robustly-built Frenchman of Senagalise descent - a black man, thus "invisible" in the Ralph Ellison sense - whose father committed suicide in prison after being wrongly convicted of theft. Ironically, his last gift to his son, found among his personal effects, was a leather-bound copy of Lupin's first adventures, which he adopted as a blueprint to his future character as a truly transparent master criminal. The first of the five episodes concerns the necklace of Marie Antoinette, to be auctioned after being exhibited at the Louvre, a subject that resonates not only in LeBlanc's early stories but in the earlier works of Alexandre Dumas.

This is a clever update; there are some witty allusions to the books (it might help to inspire a new generation of readers), it's full of stylish action and ravishing French settings, and it can be watched either in French with English subtitles or dubbed into English. I've been watching the English dub option and am impressed by the contemporary state of the art, which reflects attentive voice casting and has finally mastered the matching of room tones to the dialogue. A second season has reportedly been ordered, and I look forward to the remaining episodes.